The Goblin Laws of Guns

A lot of GLOG class are starting to use guns (like the Zouave or the Gun Priest).   I proposed the following "system" that will be both historically accurate "ish" and "balanced" for use in play.

The reason I'm doing this is because I'm going to play in a one-shot GLOG game and different players have guns of different tech level.  I am aiming to have something that is both sort of balanced, sort of easy *and* sort of fun.

I will have "elements" of a gun, and then combine them together to make a number of examples.  One thing I won't have is prices for these guns, as they would be heavily campaign and "historical" dependent - what was cutting edge in one century is old surplus in the next.

- Guns are less reliable, but no "blow in  your face" unreliable.

- Guns are slow to reload, but advanced guns are better

- Guns do solid damage... but not *that* much damage, especially the pistols.

- Edit: - I need to make this more explicit - somewhat better vs armor 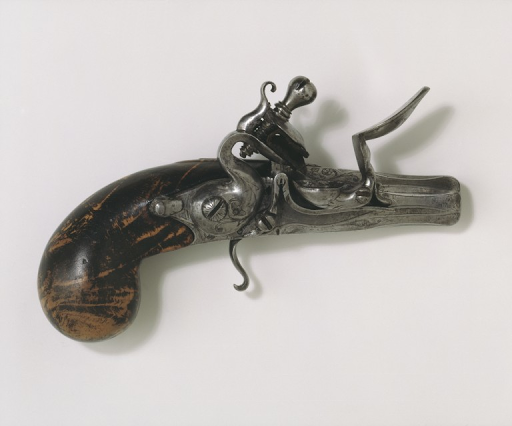 In your face Pistol (matchlock, flintlock, cap and ball, smoothbore or rifled)

The precursor to the revolver, the gun was not noted for accuracy... but hey, six shot! 1d6 dmg, range 10 feet, -1 to hit per 10 feet beyond, can attack multiple times per round if character is able to, reload time: 2 rounds/chamber

Six shots of anemic 1d4 damage!  The rich have them in engraved nickel plated with ivory handles. 1d4 dmg, range 10 feet, -1 to hit per 10 feet beyond. can attack multiple times per round if character is able to. Reload: 2 cartridge per round

A great six shooter, you can depend your life on. 1d6 damage with round ball, or 1d8 with Minié ball.  Range is 20 feet, -1 to hit per 20 feet beyond can attack multiple times per round if character is able to,.  Reload time 2 rounds/chamber

Another great 6-shooter.  You can reload faster now, but have less max damage.  Still hurts!  1d6 damage with .44 Henry.  Range is 20 feet, -1 to hit per 20 feet beyond.  Can attack multiple times per round if character is able to. Reload time 1 round/ two bullets

Zouave Snaphance. (flintlock, smoothbore, but could be cap and ball)

A handy weapon for travel or hunting.  1d10 dmg, or 2d6 with Minié ball, range 30 feet, -1 per 20 feet beyond, loading time 3 rounds and can fire in the third, or one round less with Minié ball.

.44 rimfire.  Not very hard hitting, but sooo many bullet, rapid lever action.  Handy too.  1d8 dmg, 15 cartridges - can attack multiple times per round if character is able to, range 30 feet, -1 per 20 feet, loading time 2 cartridges per round + 1 round for magazine manipulation.

This list is, of course, incomplete (edit, I will need to do a post about weird guns).  But I hope it will help GMs having some kind of baseline to make rulings about guns, especially in a game where there may still be bow and crossbow usage, or the possibility of multiple technological levels being present (time travel magic, ancient weapons, technological differences between countries etc).   In no way shape or form feel pressured to use all of them.  A game with just a few gun models is ok.

Older guns are best use in a fire once then close in to melee fashion, unless both sides are happy with staying far and shooting at each other.  They can provide the party with a big "push" of damage in the first round (the crossbow is good for this too).  More modern guns load faster.  The use of paper cartridges and Minié ball allowed for high damage and quick reloads (a carbine can be fired as fast as a crossbow), and revolvers and repeating long guns allowed for very fast firepower, often eclipsing what a melee weapon could do and certainly eclipsing the bow...

It's a well known fact that medieval armor didn't deal with guns... but it wasn't entirely useless either.  To avoid making guns too powerful, and to have something easy to remember, I would propose that guns "shave of" a step of defense (from plate to chain, or chain to leather, i.e. ignoring 2 AC) when trying to attack someone wearing armor.   They probably would work even without this rule, but if you want to run a campaign where guns dominate, this would do it.

So, some technical details about guns:

First we are going to talk about the "lock" - the thing that makes the gun go boom.  In historical order, you could make the following order of firearm "eras".  There was some overlap, of course.

1:  Matchlock: A very primitive form of gun, where you have a slow burning cord that ignites the powder - the match.  They fail to ignite on a fumble (see flintlock).  Furthermore, the match can go out if there is strong wind or rain, its glow and smoke can give away your position etc etc... it's a problem. Adds 1 round to loading time (if you rush too much you might ignite the powder with the match!)  Mechanically simple and thus cheaper.  They were all loaded by the muzzle (the front of the gun).  There are even more ancient models which I did not go into.

2:  Flintlock: A number of mechanisms (wheellock, snaplock, "true" flintlock) where a mechanism generates sparks.  On a fumble, the gun fails to ignite.  There is a 50% chance that it can easily be fixed (one round reloading the priming powder) and 50% chance that there is a serious problem - the gun needs to be unloaded because of wet powder and reloaded (doubles the reloading time).  Almost all were muzzle-loaded.

3:  Cap and Ball: Similar to the flintlock, but instead of a spark generator, there is a cap - a small copper device filled with a sensitive chemical - installed on a nipple that is struck with a hammer.  This mechanism is more reliable and doesn't mess up on a fumble.  Cap and Ball guns where usually muzzle loaded but a few were breech-loaded (from the back of the gun).  Also known as percussion guns.

4: Rimfire: Still used today in the .22, these were the first reliable metal cartridges.  The cartridge is loaded to the rear of the gun, and a hammer hits the rim, which is filled with primer (the sensitive chemical). They had the problem of being less reliable than the cap and ball (on a fumble, the round fails to fire and must be ejected) and low pressure (less damage).  Historical examples include the .44 Henry, the .32 rimfire and the .56 Spencer.  Rimfire guns were often used in revolvers and repeating rifles.   They weren't as powerful, but very useful.

And.... now we stop.  By the time we get to the next step, the center-fire cartridges (more reliable and sometimes more powerful), the guns have gotten "too good", and ranged fire almost completely displaces melee fighting.  We are now playing another game.

Now that we have this covered, let's talk about the "stock" - the size of the gun.  The longer the barrel, the longer the initial (no penalty) range is.  The shoulder stock also helps with aiming.

Pocket pistol:  A small thing that is easily concealed.  Short ranged, low damage.  Became possible with the flint lock - clearly you can't have a matchlock in your pocket....  size is 1/3 of a slot

Saddle pistol:   A large pistol that could be concealed.  The longer barrel and larger caliber increases the damage.  The saddle wheel-lock pistol of noble cavalry, the 6 shooter of the cowboy, the flintlock pistol tucked in the pirate's sash all fit this.  Range is not great.  Takes 1 slot.  Can be used as a club (1d4 damage) in a pinch.   Matchlock pistols did exist.

Carbine:   A small, handy rifle, favored by hunters, cavalry/dragoons, adventurers and scouts.  In earlier time this was the arquebuse or mousqueton, in later time the "Winchester gun" ie the lever gun. They do more damage and have more range than a pistol.  They can also be used as a club by bashing with the shoulder stock (1d4 dmg).

Full sized musket/rifle:  A long, cumbersome affair, had the most damage but a pain to carry (3 slots).  Could have a bayonet that allowed to do 1d6 dmg in melee.  The matchlock musket were so heavy they required something to rest the barrel against - a fence, a wall, or a fork designed specifically for that purpose.

Smooth bore:  If the gun is smooth-bored, they are easier to load, but they have less range.

Rifle:   Takes longer to reload when muzzled loaded, but have more range - each step beyond the initial range is longer.  Was invented in the flintlock era.

Double barrel:  double the fun, double the cost. A few flintlocks, a lot of smoothbore cap and ball (shotguns).

Length of the barrel:  Longer guns have more power and range, but are less handy/concealable and take longer to load.

But what are we shooting?

Loose powder.   There is no cartridge.  You have a ball, some powder, some wadding and a ramming rod.

Paper cartridge:  Everything is measured and organized in advance.  Reduces loading time.

Cap:   Instead of putting powder in a frizen/touch hole, you could have a sensitive chemical housed in a small copper cap.  Percussion guns, also know at cap and ball, were far more reliable than the flintlocks. The precursor to the primmer.  Most were muzzle loaders, a few cap and ball were breach-locked.

Metallic cartridge:  Like a paper cartridge but even better.  Comes whit its own primer.

Ball:  a big round lead ball, the default.  Used in all guns except metallic cartridges. Can be used both in smoothbore and rifled guns, although the later could be difficult to load.

Shot:  a bunch of smaller ball, rocks, nails, coins jammed in there.  Only used in smooth bore guns.  Shot does not take a range penalty, rather a *damage* penalty.  For example, a 2d6 gun loaded with shot would do 3d4.  After the first range increment, the damage would fall to 2d4, then 1d4, then the pellets have spent too much of their energy to do real harm.  Shotgun shells were not available in this era.

Minié Ball:  A more modern form of bullet - it is easier to load and engages the rifling better, leading to higher velocities, increasing the damage by one step.  The Minié ball was available for late flintlocks, cap and ball guns, and metallic cartridges (sort of).  They weren't used in smoothbore barrels.   They, and derivatives, made firearms far deadlier, and cause war amputations to be far more common du to their tendency to shatter bones. 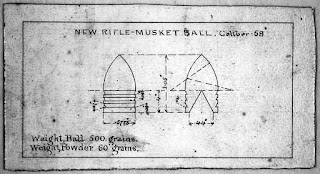 Magical bullets.  What are we shooting?  +2 bullets?  Homing bullets (advantage to hit)?  Fire bullets, silver bullets, poison bullets?  I don't know!  You make it up.  Have fun, it's magic!  I will note that "older" guns that don't use metallic cartridge may have more flexibility with magical bullets.

Paper cartridge can be used with muzzle loaded or breech loaded guns.  Reduced the loading time by 1 round.  A trained gunman with decent equipment can make about a dozen such cartridges per hour, but most preferred purchasing them.

Metallic cartridges are fast to load, and the characteristic of the gun become the defining factor in loading time.

Longer barrels take longer to load than pistol *if* the gun is muzzle loaded.

Ball takes longer to load in a muzzle-loaded rifle (but not smooth bore).  The Minié ball does not have this penalty.

Damage depends on the caliber, the length of the barrel, the type of bullet and the use of metallic cartridge - the early ones were often weakly loaded.

Email ThisBlogThis!Share to TwitterShare to FacebookShare to Pinterest
Labels: History, The Glog, warhammer