I don't mean in the game world.  I mean here, on Earth. Grimoires are being massed produced and this gentleman of some means, living in a small village a ways of Paris, has given these books some serious thought.  He can't practice too openly (the scandal!), but in his summer home on his cousin's lands, away from too much prying eyes, he dabbles.  The locals know all about it of course. 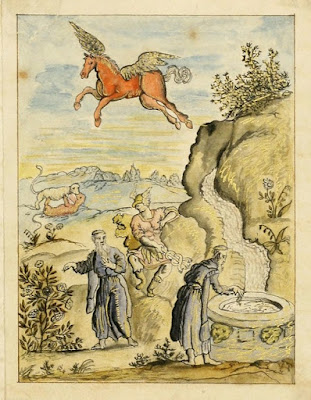 Now we KNOW that magic "doesn't work" in the real world, but you have to consider that people were much more inclined to believe in the supernatural back then.  More importantly, the placebo effect is a real thing, and it's enhanced by belief.  When someone takes a placebo and they get better... they actually are getting better.  In some cases it's just for a little while, but in other cases they are truly cured.  In other words, the "fake" part of the placebo is the remedy, not the effect.  So add the placebo effect with a bit of positive thinking and a fair bit of collective delusions and *tada!* you have a spell that "works", at least some of the time.

So our country wizard has had success at curing old Marie's headaches.  And his spiced liquor he's been preparing is pretty nice, and so is his hand soap (because some Grimoires had recipes for those too - actual formulas that sort of work).  And he's paying pretty handsomely for that high purity lime the village is known for... so of *course* his talisman against snakes totally works, you should buy one!  His ring of invisibility... well not so much, but even he'll admit that the formulae is most difficult, and that he hasn't gotten it right yet.  A man would only need to have mastered a handful of spells and be working on a few others to be considered a proper wizard, alchemist or whathaveyou.

Some wizards will be charlatans selling snake oil and the like (some grimoires had formulas for scams, so you could, ahem, "ward yourself against them").  But I think others believed in what they were attempting to do, and in the right circumstances, so would have many people around them.   Life was hard and full of uncertainty, there was a need for "reassurances", charms against various harms.  And besides, some of their concoctions actually worked.

When women did that, of course they focused on the more practical effects (more cures, less "turn tin into silver" nonsense) and, for their efforts,  were sometimes accused of witchcraft.  That's patriarchy for you.