The GLOG alchemist: a playtest

I previously published a GLOG class called the alchemist.  I was pretty proud of my creation, but it was a complex class, and it hadn't been playtested.  Anyone who does game design knows that no matter how "solid" something seems, if you don't playtest it, you can't be certain that it works like you intended. The first thing I realized is that I hadn't included backgrounds.  Oops

Either come up with something good yourself, or Roll 1d3:

1: wizard.  You have no talent at casting spells, but you can detect magical items as a wizard.  You start with 2d10 silver

2: cultist:   Use the summoner class as a guide to create the cult you used (or still? belong to).  Start with 1d6 silver and a dagger.

3: Inventor:  You start with 1d12-6 gold and a peculiar crossbow that only you can use.  If  you have negative gold, you owe it to someone who may prove troublesome.

The second thing - much more important - that playtesting uncovered was that the  degradation rules and the resulting "stabilize" system just do not work well in play.  The design intent was to prevent someone building up a huge arsenal and "nova strike" with all their spells at once.  It doesn't really, and it really is penalizing to the character.  If a level 1 alchemist prepares a concoction one day but doesn't use it, each day there is a 1/6 chances of it being lost forever - those CDs aren't like a wizard's MDs, they don't "come back".  But if the alchemist doesn't, well the alchemist has no magical powers.  This is *not* ideal nor fun.

What we compromised instead was that alchemical preparations should have an "expiry date".   How to do that easily in game?  Simple.  Keep track of the character level at which the preparation was made, and 2 levels  higher the preparation has gone stale and is worthless.

Example:  Kava the gooseling alchemist has made a smoke pot at level 1.  He keeps it for a while, but if he doesn't use it by level 3, it is now a dud and the CDs are lost.

So why not simply at the next level?  Well it could result in something expiring *very* fast if the PC happens to level up on the same session as the smoke pot was prepared.

I would update the preparation tracking sheet with something like this: 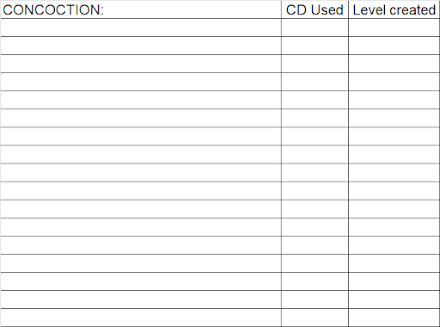 Lastly, we decided that the sword of St-Germain alchemical enhancement can be used on a dagger - or any vaguely sword-like implement.  It seemed a bit silly that the alchemist could not use the sword they prepared due to proficiency issues.

So how did it play?  Fairly well!  The alchemist basically plays a bit like a conservative mage, but can be rather good in clutch situations.   It's not for every players clearly, but my player enjoyed it.  We also found that the proposed amounts of CD was about right, at least right for my campaign pacing.  I also occasionally allowed the player to find spare CDs when it made sense, such as finding an abandoned alchemist's lab.

Of course, one PC in one campaign not sufficient playtesting, so if you too have played an alchemist, I would love to hear about it.

Email ThisBlogThis!Share to TwitterShare to FacebookShare to Pinterest
Labels: alchemy, The Glog