A new Familiar: The Potato

Familiars are an important part of some D&D rule-sets (they are sorely lacking in the GLOG...*) and can be a fun and very useful addition to a party.

5e, 2nd ed and other editions had lists of "regular" familiars people could take:  cat, raven, crab etc etc etc.  But I have realized that these lists are all missing an *excellent* form for a familiar:  the Potato. 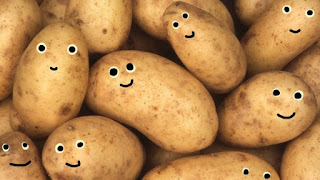 1: No plant based familiar

2: Something people are familiar with, it's plausible.

3: SUPER stealthy.  Who suspects the potato?

6: In a pinch, the potato can be used as a weapon and hurled at your foes.

7: The potato makes for an excellent bribe for certain foes, esp goblins (this makes the potato a poor choice to spy on goblins).

9: It cannot fly, but it will not get sucked into a jet engine. (thank you Dice and Doggos for that crucial contribution)

10:  It can be used as a battery to power high tech devices or perhaps used as a magical focus (autographedcat came up with this one)

That's a lot of utility for a simple familiar!

Now  you might say "ok sure, it's the best regular familiar, but surely it doesn't beat the improved familiars like the imp".  And yes, you would be 100% correct.  To be in the same class as the imp, you need a turnip.  Why?  I have said too much already...

*edit:  about that, I've been a bit out of touch from the GLOG-sphere so maybe there are several ones now out there, I thought I should note that.  Also, some have asked me to generate rules for familiars in the GLOG and that is harder than in looks, since spells are "entities" of sort in the GLOG magical theory, so a find familiar spell may not make sense.  A familiar in the GLOG would be something different...

Email ThisBlogThis!Share to TwitterShare to FacebookShare to Pinterest
Labels: 5e, magic, The Glog