So, let's talk about the GLOG.

To most people who've tried a number of D&D systems, it's abundantly clear that the GLOG system is for low powered characters.   The 3.X, pathfinder and 5e (4e?) characters are clearly more powerful than GLOG characters.  I think the same could be said of B/x PCs, although the difference is less and only becomes great at higher level.

So I had an idea.  What if these characters are all in the same world?  What are we simulating with our games then?   The 3/5e folks are like the super heroes of the setting, especially at higher levels.   Like Ironman, Wonder Woman etc. but fantasy-ish and less comic-book ish.  The B/x adventurers are the local, lower-powered heroes - like Jessica Jones.  Much stronger than a normal person but nowhere near as capable as say Thor.  (btw, in this line of thinking, Captain America would be a super high level b/X characters handing out with the 5e types... but I digress).

So now you, my dear reader, are thinking "aha, and the GLOG adventurers are ordinary people trust in a life of adventure, living by their wits?".  No.  This is a *lie*, that you have been tricked into *telling yourself*.  But it's not your fault.

There is a conspiracy.

One hidden in plain sight.  But a bit like the first rule of fight club, we don't talk about the Goblin Conspiracy.

We who play the GLOG.  We aren't playing adventuring ordinary people, although we may not know it.

We are playing goblins.  Goblins trying to be adventurers.

It's called the GOBLIN LAWS of gaming.

What is the #1 Goblin Law of gaming?  You are not a goblin.  The only way for a goblin to be a hero is to not be a goblin.  Every GLOG hero in the morning mentally chants "I am not a goblin, I am not a goblin", subconsciously fooling themselves into thinking they are not goblins.

But the second Goblin Law of gaming is that "even though you are a goblin deluding yourself into not-goblinhood to attain hero-dom, you are still a goblin, and you are weak as F and you better act in consequence".   This is why the GLOG heroes always try to avoid combat, avoid rolling, and instead try to be cunning, start with almost nothing and are always scrambling for cash.

It is reflected in the rules!  It's why a GLOG fighter only gains a few HP per level.  Why the strongest fireball a GLOG wizard can shoot is 4d6, and said wizard might blow herself up due to casting a 3rd level spell.  Why the elf PC is the same as every one else, except he has +1 to smelling flowers or something and is pretentious as heck (despite lore depicting elves as more than mortals).  It's why the summoner summons talking ducks and cafeteria cooks instead of demons and elementals.  It's why some parties end in disastrous and hilarious TPK.  It's because they are freaking goblins.  Goblins are malleable and adaptable, but ultimately this is the best they can do.  But to accomplish this, they have to pretend they aren't goblins.

And how do you get your players to roleplay pretending not to be goblins?  How do even get them to agree to play this game? By not telling them they are goblins.   And by making them use rules where they are weak like goblin heroes.  See if anyone will notice.  It's been what, close to 4 years now?

Clearly the chief architect of this conspiracy is Arnold K.

He started all of this.  And he is clearly a goblin.  I mean look at this: 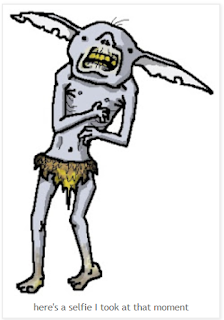 He admits it!  And look at that face.  Such a complex expression.  And the reason it's so multi layered is because there is GUILT in that look.  He knows he's about to fool many.  But it must be done.

Who else is involve?  Skerples has to be.  All those rules sets and classes he's written, for different settings, different circumstances.  Trying to expand the limits of what a goblin can be.

The others (and there are many of us)...  I don't know.  I think we were caught by the current, fell under the goblins' spells, spread their gospel unwittingly.  I know I did.  I'm certainly not a goblin... I think.  I wasn't at first at least.

Why do all this?  What is their purpose?  What is Arnold K trying to do?!?

It's simple.  Goblinism is a thing you can catch.


P.S.  And no, the goban class doesn't prove that the other heroes aren't goblins.  It just shows that some goblins can't be anything but goblins.
Posted by Ancalagon_TB at 10:27 PM

Email ThisBlogThis!Share to TwitterShare to FacebookShare to Pinterest
Labels: The Glog