I thought that was nearing the end of my effort to translate the Petit Albert Spells.  I'm clearly not going to do all of them.  Some are boring, repetitious or of dubious adventuring use - although creative players can use almost any spell to their advantage.  However, once I made a list of spells I did want to translate I realized that there are still quite a few, so this will not be the last post on this book.

After I'm done, I probably will start on a different Grimore - the Grimoire du Pape Honorius.   Eventually out of all of this I will try to publish a class, a system, a spell list, something to use some of this.  Perhaps, if we are very lucky, someone more talented than I will take a crack at it.

Also, now that I think that we all know what the format and feel of these spells is,  I'm going to be slightly less "faithful" to the voice of the original author - I'm going to be trying to be a little bit clearer and concise, and especially try to fix the run-on sentences.

Live chastely for at least 5 or 6 days, and on the seventh day (preferably a Friday), eat and drink foods of a warm nature that excite you to love.  When you feel in that state, have an informal conversation with the object of your passion, and ensure that they can look at you continuously, as you look at them, for 15-30 seconds.  The visual rays will meet and will be a powerful vehicle for love; so much so that they will penetrate the heart, overcoming pride and cynicism.  It can be difficult to convince someone who is prudish or shy to look at you directly for more than a moment.  However, one can achieve that by telling them that one has learned a secret divination that can learn about their future (happiness, long life, etc) or some other thing that will peak the interest of the target of your affection; tell them that the divination requires direct eye contact for a few moments.

There are so many love spells in this book, so here is one.  Of course love spells can be used in adventuring!  I like this one in particular because you can only cast it one someone you love - no funky ingredients or incantations, just the magic of the souls.  Incidentally, the above spell is also mediocre dating advice... not great, but it's better dating advice than some of the dreck I've seen online.

An impotence spell (and the counters)

Have the member of a freshly slain (term is unclear) wolf and approach the door of the target.  Call him by his proper name, and when he replies, tie the member of the wolf with a piece of white thread, and he will be so impotent to be as castrated.

To prevent this spell from working on you, simply wear a ring in which is set the right eye of a weasel.  To counter the spell, the ancients assure us that the "oiseau rain" (some type of bird, I cannot find the meaning) will cure this spell by eating it following fasting, roasted with blessed salt.  Burning the teeth of a man who has since died and inhaling the smoke will also free you from the charm.  Also, a torch made of oat or wheat straw put under the head of the bed of someone affected will work.  If both the man and the woman are affected by this charm, the man must pee through the wedding ring while the woman holds the ring.

Why is this relevant to adventuring? Politics that's why!  If the King can't have an heir...  It's also interesting to see the numerous protection against it, although I the translation of this was challenging.


To be fortunate at games of skill and luck.

Take an eel that died due to want of water, and take the bile of a bull killed by the fury of dogs.  Put the bile inside the skin of the eel, along with a dram of vulture blood.  Tie shut both end of the eel skin with rope from a hanged man, then put it inside hot manure for 15 days.  You will then dry it in an oven that is heated with ferns harvested on the eve of the Saint-Jean (Saint-Jean Baptiste in June?). You will take this to make a bracelet, and on this bracelet you will write, with a crow quill and in your own blood the following letters HVTY.  By wearing this bracelet on  your arm, you will make a fortune everywhere.

As nothing is as worthy as man's reason, and as it's often lost via excesses of win, it is convenient to give him protection against this.  If you are invited to some meal where you fear succumbing to Bacchus's tender violence, you will drink before getting to the table two spoonfuls of water of betony (bishop's wort) and one spoonful of good olive oil, and you will be able to drink wine in complete peace of mind.  You will be careful that your cup does not smell of nail trimmings or the savory herb, as both are ingredients can strongly contribute to drunkenness.  If you have been surprised and are already drunk, you must wrap your genitals in a cloth drench in a strong vinegar, and you will return to your senses.

That last piece of advice... oy.


The antidote to said deadly stink and other miasmas

(in a previous entry, I showed the translation for a deadly miasma spell.  Here is the counter)

To be warded against these deadly infections, here is a sovereign antidote that will triumph against all sorts of venoms and poisons.

Take two handfuls of leaves of common Saint John's wort  in season (before the flowers have fallen).  Infuse them in four pounds of olive oil in the sun for ten days.  Then put them in a bain marie with hot water, press the leaves to remove the juices and put them in a vessel of thick glass.  When the common Saint John's wort has flowered and is seeding, take a handful of these flowers and seeds in this glass vessel, and make it boil in a bain marie for 1 hour.  Add 30 scorpions, one viper and a green frog from which you have removed the head and feet.  Boil for a short while, then add 2 ounces of powdered, minced or crushed of each of the following:   gentian root, fraxinella, small or great fortelle or its root (no idea what this is), septfoil, rhubarb, Armenian bole, properly prepared theriac and a bit of crushed emerald.

Close the vessel well and expose all this to the sun during a heat wave, you will then digest this for three month in warm manure.  After all this you will funnel this composition in a tin or strong glass vase.  To use it, rub it around the heart, the temples, the nostrils, flanks and along the spine.  It will also cure the bite of poisonous beasts.

As part of the argument to prove that magic is "natural", a spell to keep snakes at bay

It has been noted that in Switzerland and Sweden, where there are many snakes because of the mountains, that said snakes fear the Greek language.  They fear the efficient virtue of the three words "osy, osya, osy" so much so that they will plug one of their ears with the tip of their tail and press the other ear against the ground so to not hear these words.  This makes them immobile and stupefied, unable to hurt men and women.

This argument was important because magic had to be seen as respectable, a result of natural laws, and NOT dark satanic powers!  I also note that this is probably the easiest spell to cast in the entire book, and pretty easy to test too.  (spoiler: it won't work).

To make a treasure finding candle

... I will end on this topic with a spell given by Cardan to know if a treasure is where we are digging.  He claims you need a large candle, made of human tallow, and that it must be set in a piece of hazelwood as illustrated. 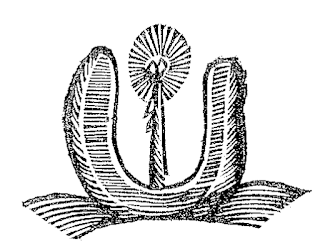 There is also advice to have blessed candles at hand if you think spirits are near the treasure, and that you should ask them what you can do for them to put them at peace (and that you should do said things).  Even back then undead in dungeons were a problem!

The hand of glory - a candle made from the hand of a hanged man, which stupefies those seeing it (allowing you to rob a place)

I must admit that I have never personally tested the secret of the hand of glory, but three time I assisted the definitive convictions of outlaws who admitted, under torture, to having used the hand of glory in their robberies. These interrogations revealed these detail.  The hand of glory is made from the hand of a hanged man, and its use is to stupefy and turn immobile those to whom it was presented to so that they would be unable to resist.  The hand was prepared thus:  a hand (left or right) of a hung man exposed on the side of a road is taken and well pressed in a funerary shroud to get all remaining blood out.  It is then put in a clay pot with a powder made of well pulverized zimat (this may be cinnamon), saltpetre, salt and long pepper, and left there for 15 days.  It must then be removed and dried in the sun during a heatwave until it is very dry.  If the sun doesn't suffice, it must be in an oven heated with ferns and vervain.

You will then make a sort of candle with the fat of the hung man, virgin wax and sesame of Lapland (is there such a thing?!?), and the hand of glory will be used as a sort of chandelier to hold this lit candle, and in all places one goes with this macabre instrument, those present will be stuck immobile.

aaaaaand now we see why the authorities would try to band this book.  I also like how the author makes very casual reference to torture - different times.  But he continues on:

A ward that will stop the hand of glory from working

When the thieves were asked if there was no way to ward oneself against this artifice, the criminals reveled that the hand of glory will lose effect and that the thieves will not be able to use it if the door sill (or other area where the thieves would enter) was rubbed ith an ointment made of bile (?) of a black cat, fat of a white chicken and blood of an owl, and that this ointment must be prepared during a heat wave.
Posted by Ancalagon_TB at 10:29 PM